Paul Rigby of theaudiophileman.com has a listen to our TT-1 turntable interconnect and finds there's lots to make him smile...

Let me out!
www.theaudiophileman.com is the home of respected reviewer Paul Rigby and he starts this piece with an observation about Hi-Fi cables in general. He makes the point that low grade cables do nothing to remove the type of noise that saps so much of the pleasure out of listening to music. Replacing them with the likes of the TT-1 can make a huge difference, not because they "actively improve sound quality" but rather because "they allow you to hear the music that's already there and is basically masked from the ears".

This point, he says, is no more relevant than when it concerns the tiny signals that need to be amplified by your phono stage. The level of amplification required in this situation is also capable of greatly amplifying any noise in and around the phono stage too, so this is a critical point. There are two areas where the TT-1 can help here: "The cables are ideal for those turntable users that need cables to run to a phono amp directly from their deck [and] they are also useful as interconnects from a phono amp to a main amp". Paul tested them in the latter configuration.

Unusually for a review, Paul initially describes and assesses the sound when using the standard cable first. This is actually really useful because it gives us a really clear benchmark from which to judge any improvements, and it also illustrates well just how much these 'out-of-the-box' cables can strangle a good system's performance:

"The basic cable offered lots of impact on the drums but it was all attack and no character. The organic drums could have been synth drums for all my ears cared. More than that, both the synth crescendos and the entire electric violin solo sounded horribly bright and forward, hurting the ears on occasion with its tinny screech". 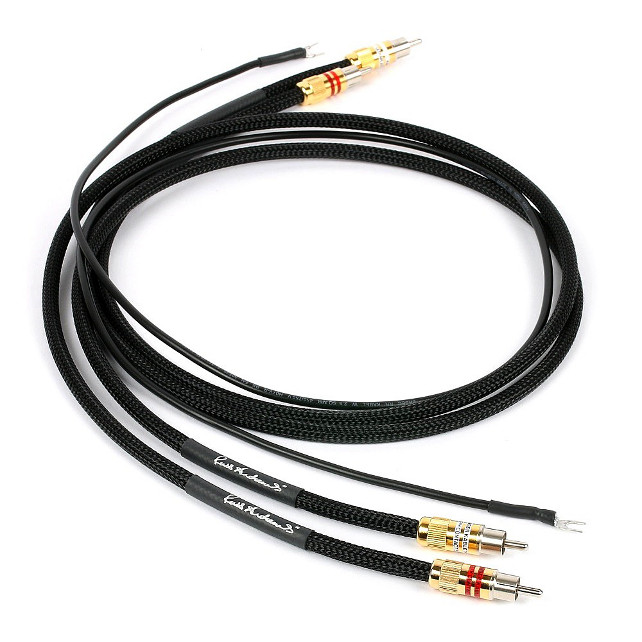 These are the kind of problems we hear about all the time, and it's so easy to assume that this is a problem with your hardware, often leading to unnecessary and expensive changes in equipment that still don't address the cause of the problem. So how much difference can it make? I'm going to quote Paul at length here because his description is very revealing:

"Replacing the basic cable with the Kimber, the metronomic synth note at the beginning of the track now sounded metallic instead of tinny while the drums now offered a 3D aspect instead of sounding like only the beginning of the drum note was being played: that attack I mentioned. The percussion now sounded heavy, with a large bulk and mass. The electric violin was loud without being screechy and the synths offered far more focus. The upshot of both of the latter also meant that, for the first time, I could properly hear the bass guitar and, not only that, the bass guitar strings being plucked! The change in sound quality was not just an enhancement, it was a dramatic improvement."

He's right; these are the kind of improvements people expect from an equipment upgrade. But, the thing is, you wouldn't achieve these improvements by changing the turntable because you'd still have the same level of cable throttling the performance!

In conclusion, Paul is emphatic in his recommendation:

"The TT-1 shows how important the cable running from your phono amp is. The wrong cable can hamper sound quality frankly cocking up any good work created in the phono amp itself. In my opinion, it's probably more essential to get this one cable right, in terms of budget priority, than any other cable in your hi-fi. The Kimber does the job and does it well."