Overview
Why X Blocks™
Designed by us from the ground up, X Blocks™ are the ideal choice for any level of system requiring up to 6 sockets (for bigger systems, choose our PowerBlocks™). From a small CD player / amplifier combination up to a high-end system, X Blocks™ allow your system to perform more efficiently and effectively. 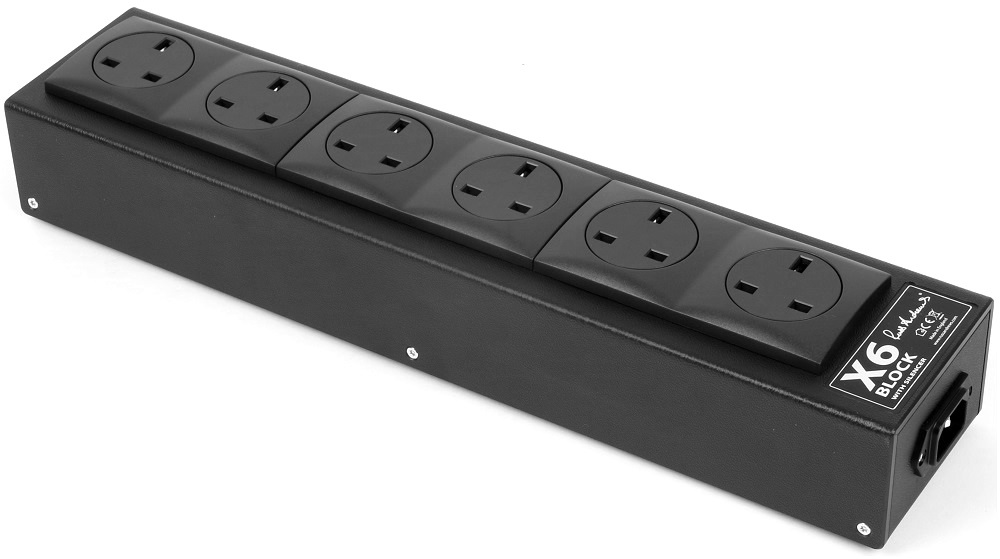 X Blocks™ are hand built to exacting standards by our highly-skilled manufacturing team and are guaranteed* to provide a lifetime of listening enjoyment. They're compact, attractive and versatile: simply choose how many sockets you need, specify your mains cable, then sit back and enjoy better performance from your Hi-Fi or Home Cinema.

Not just for use with smaller systems.

Even if you’ve a bigger system, there are a number of places where you could use X Blocks™. Run out of sockets in your PowerBlock™? Add more by daisy-chaining an X Block™ into the spare 16A on the end of your PowerBlock™.

Don't forget! We are so confident in the performance of this product that it is covered by our 60 Day Home Trial with Money Back Guarantee. Buy the product and if you're not completely satisfied, you can return it within 2 months for a refund. For full details click here.

The 2, 4 and 6 way Height and Depth dimensions of the X-BLOCKS are the same, only the length differs. The height includes the feet and sockets.

What Hi-Fi? Sound & Vision magazine reviewed our X6 Block as part of a group test in their September 2015 issue. And it's fair to say that they really liked it!

They quickly found that the X6 Block was adept whatever source material they played, finding that it makes for "a more revealing and seamlessly integrated listen". They found that the enhanced performance was "tangible, with impeccable timing and smooth integration, allied to an expansive soundstage and rigorous stereo focus."

Summing up, they couldn't find anything to say against it, concluding "By allowing your electronics to give their best, this mains block is worth every penny".

Paul Rigby reviews the X6 Block on his website www.theaudiophileman.com.

The review compares the X6 first with a standard high street extension and then with a competitors offering.

"Turning from a basic, bog standard, High St. power block ... playing Dexter Gordon's I Was Doing All Right and plugging in the X6, the soundstage sprang to life with a layered complexity that immediately forced a smile" he says. And the improvements continued, especially in the musicality of the performance. Listening to Gordon's sax with the X6 brought more emotion to the music and "was a lot smoother" than before. The double bass, which had been "largely absent from the basic power block" now provided the "rhythmic foundation" for the track. In fact, he observes, "You could hear the nuance of the plucked strings for the first time"!

The results were just as impressive when moving over to Rock, with a recording of The Who's My Wife: "The lead vocal was also now much more interesting with the double tracked effects providing intriguing layering and depth to the performance"

Moving onto a harder test for the X6, Paul compares its performance with a competitors' extension block and the results were clear: "X6 provided a more secure presentation, giving the sax the trumpet a better rhythmic base to work from. Meanwhile, the X6’s upper midrange was more focused and smoother." In conclusion, Paul awards the X6 a "Groovy" award. 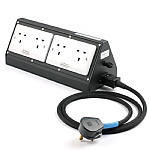 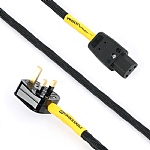 YellO Power UK to IEC
$66.62
(8)
Other Russ Andrews mains extensions
Customer Reviews
Overall product rating 4.9 / 5
5 / 5
reviewed by Sharp14 Mar 2020
Yes, I recommend this product.
"Brilliant"
I spent so long trying to find a good mains extension and decided on this having been using a qed one for the last ten years and have no regrets, makes my system sound so much better, Sugden masterclass amp and Leema Antilla cd player, You will notice a big improvement
5 / 5
reviewed by David Warner01 Dec 2017
Yes, I recommend this product.
"Quality Merchandise!"
My sister bought me an X6 a few months ago so i substituted it for my existing powerbar 8 in my home cinema set up. Straight away the bass was less boomy & a veil has been removed on the visuals. Found a preowned X2 on Russ’ site so i snapped it up for cd/ amp duties replacing a powerbar 4 & again much cleaner bass and bigger headroom. Love these X blocks
5 / 5
reviewed by John Halloran24 Aug 2017
Yes, I recommend this product.
"An Unexpected Surprise"
Before this, I'd never looked into power cables / conditioners much, believing it to be a hype.

Well, I was wrong. The X6 is a pretty big upgrade. As others have pointed out there are big improvements in the bass, especially the low end which gets tauter and better defined. There's also across the board improvement in detail and placement, and the high end is extended, too. Added to this, things seem more accurate and fuller timbrally.

I thought I'd probably return this before I heard it. But no way, I'm keeping it!
5 / 5
reviewed by Neil11 Apr 2017
Yes, I recommend this product.
"Pleased With X6 Block"
I have been considering an upgrade of my Naim Nait2/Arcam CD/Manticore TT, but having read Russ's views on the advantages of improving the mains supply and reading customer reviews, I decided to give the X6 and YellO power cord a try. I was of course a little unsure about spending a considerable sum of money on what my friends and family see as a bit of wire and some sockets. However I am more than happy with the improvements, the system has come alive ! The sound is so much more open and detailed, as a result I am spending more time listening to my music collection. Thank you Russ.
4 / 5
reviewed by Nathan16 Mar 2017
Yes, I recommend this product.
"Clearer Sound"
HiFi is very subjective and what system you use and the environment it is in obviously play a big part too. I bought the X6 with a Powerkord 100. I was immediately very impressed with the build quality of the X6. In my circumstances, and after being well run in, there was no wow facter with the X6 but a noticable, but subtle, cleaner clearer sound. With upgrading my HiFi being a long term investment I was happy as the X6 has provided a solid, well made, foundation for further Russ Andrews products I have tried which have produced a bigger smile inducing jump in performance.
5 / 5
reviewed by Lynne11 Feb 2017
Yes, I recommend this product.
"Great Sound"
The X block coupled up to yello power chord opens up more base and clear sound of my HiFi. Very pleased and Russ ANDREWS service is great and would use them again.
5 / 5
reviewed by John22 Jan 2017
Yes, I recommend this product.
"Great Powerful ."
This X block is worth the money.it is very well made and the sockets when plugs in make a perfect connection. My Hifi sounds more solid and clear with a much better base depth I use naim cdx2 as my main source.
5 / 5
reviewed by Michael Feehily11 Feb 2016
Yes, I recommend this product.
"Great Natural Sound"
Have used other mains products from other company's in the past .These product usually tend to restrict the upper & lower end of the sound ,not the x6. Allows your kit to work to its full potential with that trademark natural flow that Russ Andrews products produce.Use with a powerkord 100 or better to get the very best from the x6.
Back to Top
X