Paul Rigby takes a look at our new SuperRouter Signature and comes away finding he can’t live without it.

Back in October 2020 Paul Rigby was highly impressed by the performance of our original RF Router MKII (see that review here) which became a permanent part of his own system. So, it was with both excitement and trepidation that he received our high-end SuperRouter Signature. He needn’t have worried…

Paul is very thorough with his reviews and he begins with an exploration of the principles behind our Grounding System and notes that, to ensure the best performance, he connects the SuperRouter to an external grounding rod as recommended in our Grounding Guide here 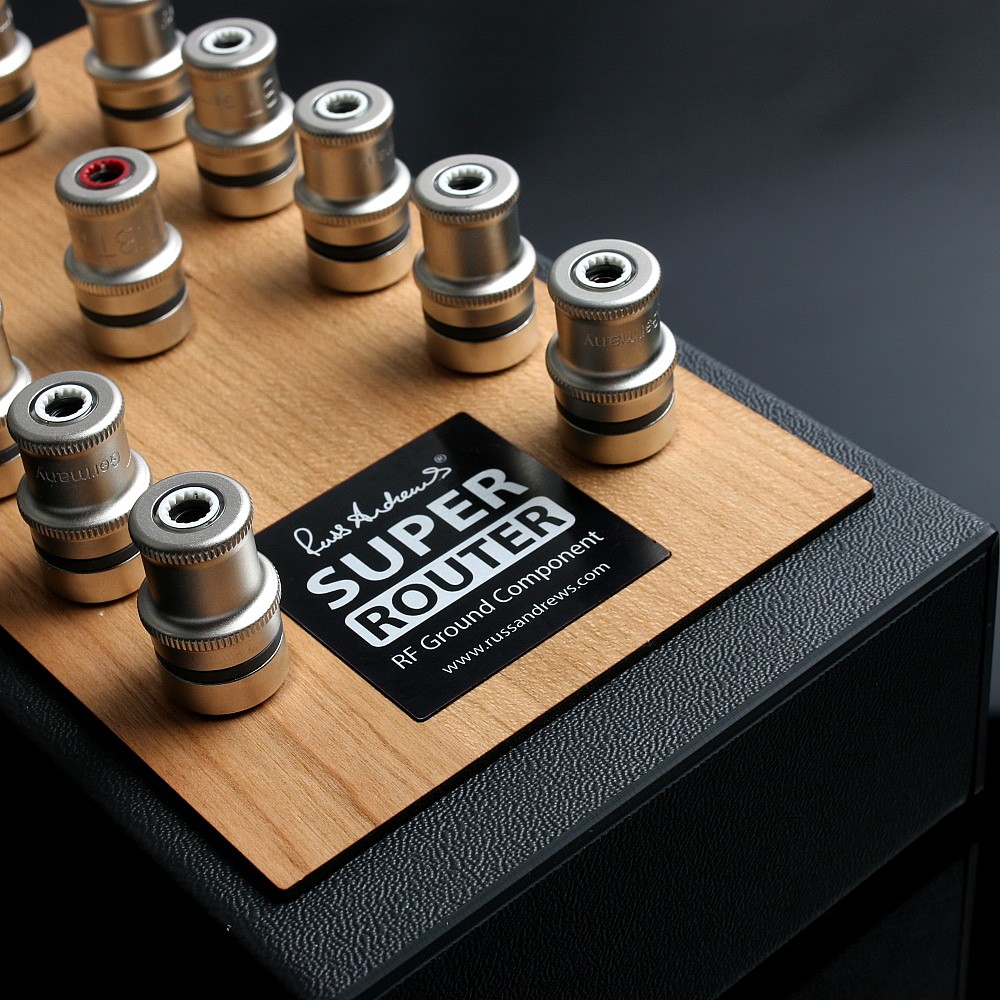 Before moving onto testing and comparisons, he makes a good general point about the vital importance of system infrastructure to achieving true high-fidelity performance from your system. “If you don’t have any flavour of anti-noise ancillaries in and around your hi-fi”, he says, “then you need to sort it out now”.

The idea that you can ‘get away’ with the bare bones of a Hi-Fi with no improvements to the likes of noise reduction, cabling and supports is anathema to Paul, who argues passionately that “if you have no grounding accessories, isolation feet and/or shelving under every component… if you don’t consider balanced power supplies, if you think anti-static guns and demag kits on your vinyl is a joke, if your cabling is of the Tesco Value variety, if you have no support for your speakers and think specialised power blocks are a waste of time. Then remind me to light a candle at my local church in memory of your ears.”

To prove the point, he starts by removing ALL grounding components from his system to establish a ‘ground zero’ so to speak. The effect is clear and not particularly pleasant: “the upper mids sounded edgy and metallic. The treble was harsh and brittle while bass sounded like a chrome ball bouncing all over the floors of my listening room. My hi-fi sounded as if it was worth around £3.50. I couldn’t take it after a while.”

The contrast with the SuperRouter in place was stark with immediate effects on the ease with which the music was presented: “With the Super Router installed, I was able to take a deep breath and relax. The edges had gone, the midrange opened up to add finesse the delicacy, bass offer an organic performance and the harshness that lived in my soundstage was kicked out of the nearest door.”

There are two key aspects to the review: how the SuperRouter compares to his existing (and significantly more expensive) grounding system; and how it compares to our existing RF Router MKII.

Paul has long-standing experience of the CAD grounding system and it forms a key part of his system; in terms of cost, it also represents a much bigger financial commitment too. “[T]he CAD GC1s are super expensive”, he admits, “priced from £1,995 per box (inc. two inputs only and one cable in the box with additional cables fetching around £250 each)."

He currently uses two of these in his set-up which, including the cables, adds up to a hefty £4500. That’s a significant amount of money (especially when you consider that the CAD offers 10 less inputs than the SuperRouter!).

The SuperRouter features 12 WBT-0710Cu input binding posts, each with the ability to take one banana and one spade connection, totalling 24 potential connections.

So, does the SuperRouter Signature ‘give a good show’?

“for the cash – and you save a hell of a lot of money going down the SuperRouter…route – the Russ Andrews box is incredible value for money, when looked at from a high-end HiFi angle.”

Admittedly, the CAD system is simpler to set up, without the need for an external ground rod. To some extent, this can be alleviated by connecting the SuperRouter to one of our sockets with a grounding connection (see here), although performance will not be quite as good.  “But look,” he responds, “for the cash – and you save a hell of a lot of money going down the SuperRouter…route – the Russ Andrews box is incredible value for money, when looked at from a high-end HiFi angle.”

First of all, there’s no question in terms of ‘value-for-money’; the RF Router gives exceptional performance for the price and nothing can compete with that. But in terms of ultimate sonic performance, the SuperRouter has clear and significant benefits.

For example, in comparison to the RF Router, he notes: “I didn’t realise that I had a slight bloom around the bass. What the SuperRouter provided was a tremendous tightening of the lower frequencies. This added an almighty quickening of the tempo of the music.”

And it’s not just at the bottom end that things are improved. Listening to the album First Movement by ELO, Paul suggests that, up until this point, the cymbals have always sounded like “white noise shimmers". “Via the SuperRouter though, for the first time, I heard a measure of tonal reality. That is, for the first time they sounded like cymbals instead of a white noise tone.”

"the more I listened to the sonic effects of this box, the more my heart sank. Audiophiles know this feeling. I tend to dread it, in fact. You demo a piece of hardware. You take a listen. You hear sonic improvements and you know. You know right there and then, deep down. There is no going back."

In conclusion, he asks whether the SuperRouter is worth the money in comparison to the RF Router. His answer is emphatic: “Yes. Yes, when I see what else is around and what this product is competing against. Other products that do the same job. Like the CAD products I mentioned above”.

Ultimately, whether you go for the SuperRouter or the RF Router MKII depends on two key factors; your budget and “the value you place on sonic improvement”.

In Paul’s view, “if you want to get ever closer to the original music, if you need yet more from your HiFi in performance terms, then you need to hear the SuperRouter… the more I listened to the sonic effects of this box, the more my heart sank. Audiophiles know this feeling. I tend to dread it, in fact. You demo a piece of hardware. You take a listen. You hear sonic improvements and you know. You know right there and then, deep down. There is no going back."

"That’s the feeling I had after listening to the Super Router. This box has to be in my system".