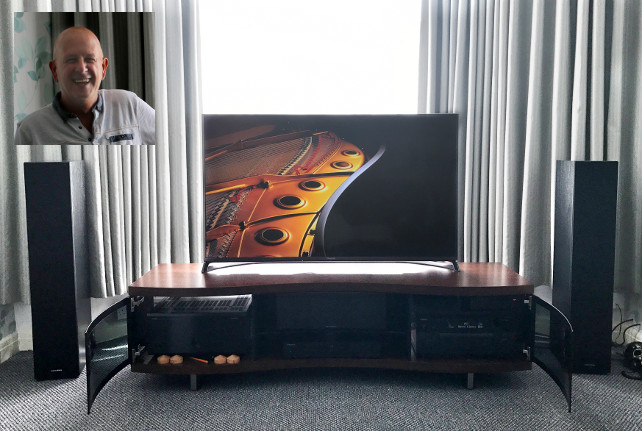 Among those who visited our stand at the North West Audio Show 2017 was existing Russ Andrews customer Simon, who'd come along to order some Kimber Timbre interconnects for his Home Cinema system. Simon brought some pictures of his system to show us; our interest was piqued and before the day was out we were organising a trip to his home in Cheshire.

Simon was introduced to us about three years ago by his brother-in-law Paul who accompanied Simon at the show. We joked about the differences between their systems at the time - Paul is resolutely 2-channel and a vinyl enthusiast; Simon, the subject of this time's customer system feature, couldn't be more of a contrast; he's a self-confessed gadget freak who loves surround sound, technology and great sound and picture quality.

Simon lives in a detached, 1930s house in Cheshire. His main system in the lounge is a Dolby Atmos and DTS:X - enabled Home Cinema (read: lots of speakers). The cinema room is set up for playing music as well as movies, together with the ability to stream music throughout the house. It was to the kitchen that we first headed to investigate. 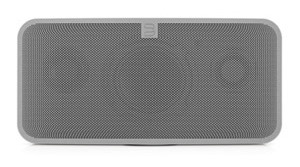 Simon's kitchen is open plan with a dining room at one end, and a conservatory that leads off the kitchen. Streamed music is courtesy of Bluesound, a manufacturer who make some well-regarded streaming components. The 'hub' of the system is called the Node which connects to Simon's home cinema system in the lounge; downloaded and ripped music is stored on a Synology Network Attached Storage (NAS) device. Music in the kitchen is provided by a Pulse 2 - Bluesound's wireless speaker. Controlled by the Bluesound app, the Pulse 2 can play content stored on the NAS and stream from Tidal; it can even play MQA files. For good measure it is powered by our YellO Power cable. The compact speaker gave a good sound, which easily filled the downstairs rooms at the back of the house, and the MQA files were clearly better sounding.

The Pulse 2 is also voice activated; an Amazon Echo Dot connects to the Pulse 2 via Bluetooth which can understand and respond to voice commands. "Alexa, play some 80s music" says Simon and within a few seconds it was playing from Amazon's music library. It's not high fidelity, but it's very slick and impressive, ideal for music in the background. A second Pulse 2 serves the upstairs rooms, and the two are linked allowing you to play music throughout the house.

After a quick look (and listen) to Simon's guitar set-up upstairs (his Marshall guitar amp is powered by YellOs and a PowerBar) we finally settled in the lounge where Simon's home cinema is. The system Simon has put together has 11.1 channels of sound in a 7.1.4 configuration ("I'm a multichannel freak", he admits) with four presence (ambience)  speakers in the ceiling to add the height channels.

There are seven more speakers serving front left, right and centre, and side and rear surrounds and a subwoofer. Like the presence speakers, the side-surrounds are installed in the ceiling to minimise the visual impact in the room. All speakers are from B&W. Amplification is from Yamaha - the CX-A5100 processor matched to Yamaha's MX-A5000 11 channel power amp, and an Oppo 203 4K player does duty spinning CD, SACD, DVD and Blu-ray Discs. 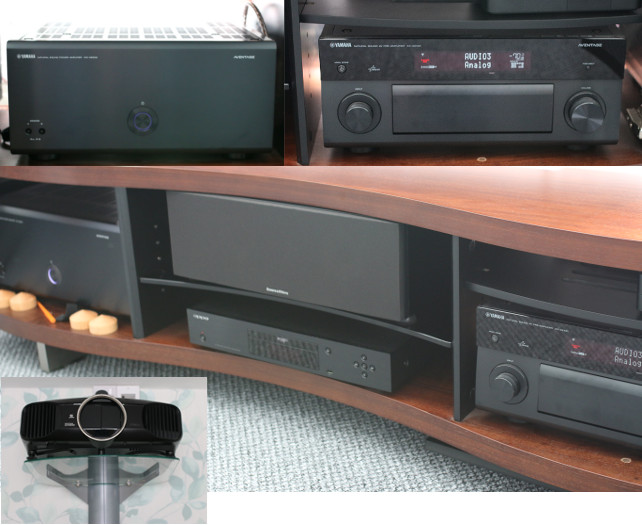 Pictures are viewed on a Panasonic 55" 4K screen, and an Epson TW9100 1080p projector is used along with the motorised 105" screen for the full home cinema experience.

Music is streamed to the system by the already-mentioned Bluesound Node which connects to the processor with analogue interconnects. Like the Pulse 2 speakers, the Node is MQA-ready and can stream these high-resolution files from Tidal easily. When playing 2-channel music, the speakers are intentionally set to 'small', with the subwoofer kicking in at about 80Hz and room correction enabled. It's not a purist approach, but Simon demonstrated the difference playing two channel content direct into the left and right speakers with no sub or EQ: no contest. With the sub in use and room correction, there was more presence, and more information. We listened to Angel by Sarah McLachlan, and Gold Dust Woman and Never Going Back Again by Fleetwood Mac, streamed from Tidal at MQA quality and mightily enjoyable it sounded.

But we really wanted to see and hear the home cinema system, and what those 11 speakers and subwoofer could do. Simon popped a demo disc in the player which was perfect for showing off the speakers and the 4K Panasonic screen. Immersive was the only word that came to mind; we were enveloped in the sound which didn't seem to come from the speakers; it moved around us, drawing us into the action or the music that was playing on screen. 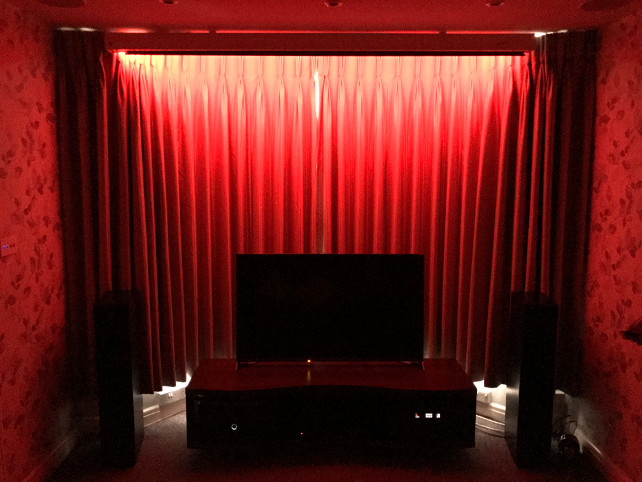 With a touch of a button on the remote, the big screen came down and we watched the opening sequence from the musical version of The Phantom of the Opera; the film starts off with a sequence in the mothballed opera house, with pigeons flying around: the surround effects had us ducking out of the way to avoid them. When the chandelier is unveiled, the music comes crashing in with the familiar phantom theme played on the organ. It was loud but never harsh - just as it should be.

We turned our attention to the infrastructure, in particular the power supply and connecting cables. When setting up the system, Simon was clear he wanted good mains power and specified a special install-version of our Balanced Mains Unit 1000. The unit was installed next to the meter in the understairs cupboard, and feeds an unswitched socket behind the system. This in turn feeds one of our PowerBars ("The X6-Block is next on my shopping list."), with PowerKord-100s and PowerKord-8s connecting the Panasonic TV, the Oppo, the amps and subwoofer. Other parts of the system, including the Playstation games console were connected via our PowerKords to the non-balanced mains, keeping them electrically away from the main system components.

Kimber Kable features heavily throughout; interconnects between the processor and power amp are Kimber's Timbre fitted with XLRs, ordered at the NW Audio Show ("more bass, more space - they're ace", Simon quipped). Kimber Cadence connects the subwoofer. The front left, right and centre speakers are connected with Kimber 8TC speaker cable, the other channels are yet to have the Kimber treatment, but Simon's got his eye on Kimber's KWIK-16 install cable. Kimber 8TC Jumper cables are fitted on the front speakers, and the casework is grounded via our RF Router.

Simon is a particular fan of watching music concerts on disc, and we finished with The Eagles' Rocky Mountain Way from their Live From Melbourne Blu-ray, and a snatch of Jeff Wayne's Musical Version of the War of the Worlds. The system was effective at portraying the scale of the venues in both picture and sound and you really did become a part of the audience.

I was impressed with the way the system didn't overpower the room it was in; the ceiling speakers go some way to reducing the visual impact conventional surround speakers would have had in the medium-sized room. With the curtains open and projector screen stowed away, it's a comfortable lounge. And yet when the curtains were drawn and the screen was down you were indeed in your own private cinema. I commented on the care Simon had taken with the selection of his components, the infrastructure and their set-up. He reflected: "I want picture and sound to be excellent. I'm extremely particular - it has to be completely immersive and involve you. If it's not, it's not good enough for me".