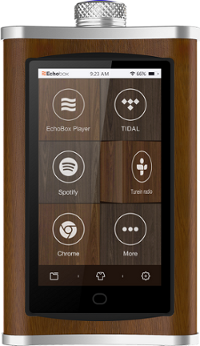 No, it's not a whisky flask. To be honest, when I first saw a photo of the Echobox Explorer in one of the Hi-Fi magazines I thought it looked a bit gimmicky. I take that back completely. 'In the flesh' it looks and feels gorgeous and the hip flask design sits very comfortably in the hand. The finish is superb too and it has that tactile nature that only wood can bring.

This is a pretty comprehensive box of tricks - a Burr-Brown 24/192 capable DAC, headphone amp and digital audio interface and streamer. At $499, currently only available on pre-order, it represents excellent value for money.

I listened to the unit streaming Tidal and the sound quality was impressive. Whereas some of the DAPs I have heard sounded a tad over bright to my ears, the Explorer was easy to listen to without any loss of detail or excitement in the presentation. The music seemed to flow effortlessly with a sense of rhythm and timing that allowed the listener to feel a direct connection with the musical performance. Just as it should be...

Whereas Echobox are a relatively new company to the market with just a couple of products to offer, Fiio are well established as a respected supplier of Digital Audio Players and portable headphone amps. Hence, there was quite a range of players and accessories on show. Such a choice can sometimes add confusion but the price points of their players are well set out, enabling you to narrow down the range to your budget. In addition, there are clear improvements at each step up making it easy to assess where the extra cash is going. 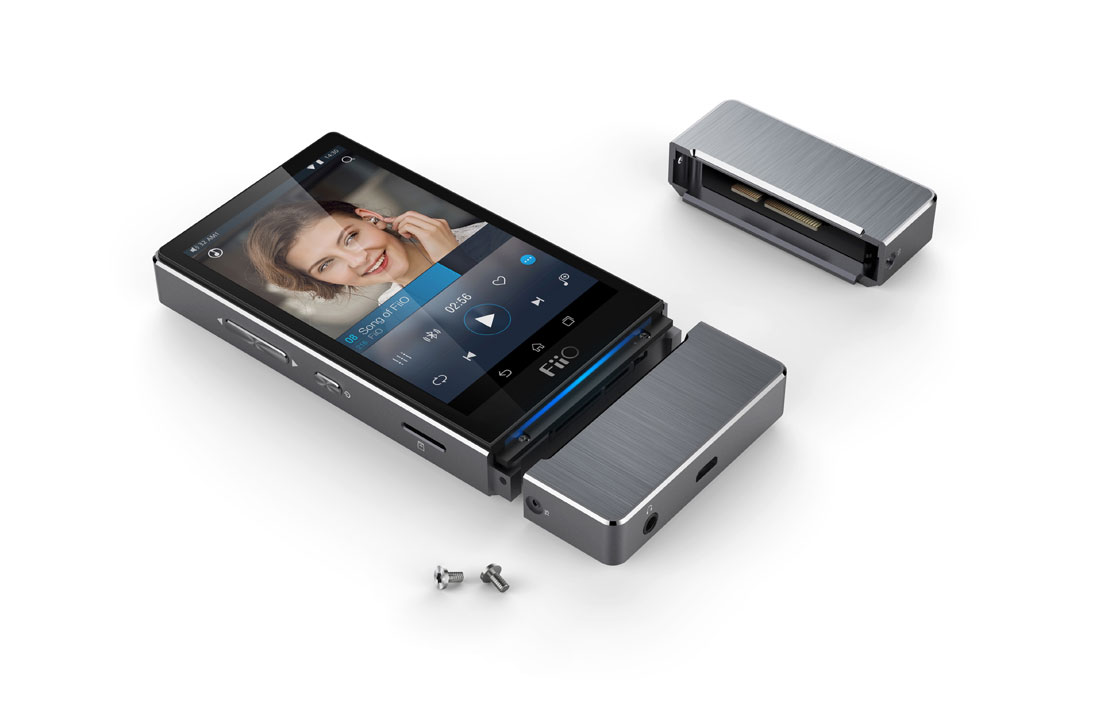 For those interested in serious listening, I'd say go straight to the top with the X7. At £459, it still won't frighten off those on a budget and it sounds very enjoyable indeed, with mp3, standard or high res. There's also the option of plugging in upgraded amplifier modules too, so you can improve the performance even further.

Each DAP in the range seemed to me to offer good sound for the money and the material quality and build is unquestionable at each price point. The X7 itself fall into a bracket similar to the Echobox above. Personally, I think that player had the edge, but you're not going to be disappointed with either of these units so I'd recommend trying them both if you can.

Mitchell and Johnson are a British Hi-Fi company who produce high value kit for the budget constrained enthusiast. When it comes to headphones, though, they appear to have a card up their sleeve.

Electrostatz is their patented technology which combines both electro-static and electro-dynamic principles to produce a speaker with the best characteristics of both. The main upshot of this is that you get the characteristic benefits of electro-static headphones without the need for an additional transformer/amplifier as is normally the case (Stax are the obvious example). So you get a truly portable design that can run off the current from an audio signal. 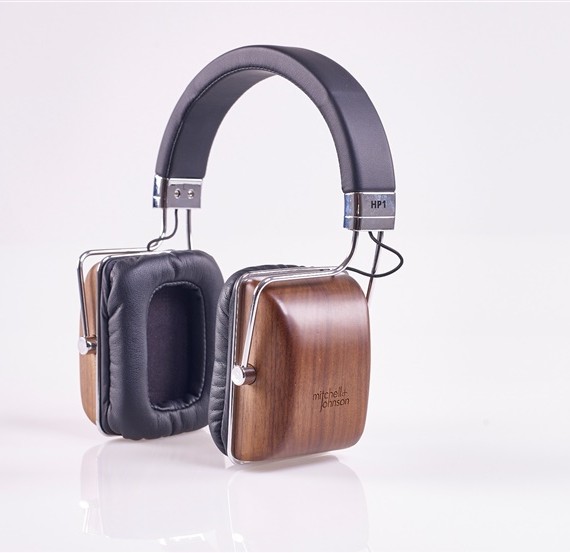 The headphones themselves are well put together, look good and are comfortable too. They're not bad to listen to either! I managed to have a first listen to an early incarnation last year at the National Audio Show 2015. I was a little underwhelmed back then, but changes have clearly been made and even the beginning of the range now offers a unique experience that is very open and involving. The story gets even better as you move up the - pretty extensive - range too. There are clear step-ups at each price point, in terms of both materials and sound quality, which means that the buyer can find the perfect model for their budget. Well worth a listen...

In terms of reputation and publicity, this was one of the 'must see' pieces of the show. Not everyone could though, as you had to book a listening slot in advance and places were limited. I was resigned to the fact that I wasn't one of the few until a very kindly gentleman I was chatting to offered me his ticket. 4 O'clock it was then! 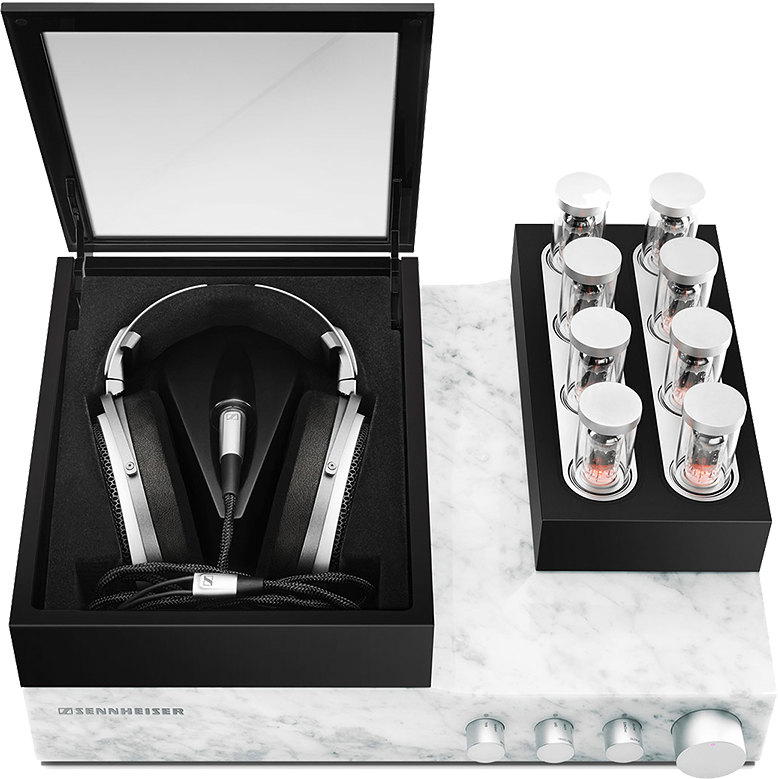 As the time approached, I have to admit I started to get a little bit excited. I guess all the publicity I had read, along with the legendary status of the original Sennheiser Orpheus, had got to me and my expectations were high. Never a good thing...

They say you should never meet your idols. It's good advice. When you have put someone - or something - on a pedestal, they are unlikely to live up to your expectations. Now don't get me wrong, the Orpheus headphone/amp combination was good; very good. It dug into the performance to reveal aspects I'd never even imagined were there. It was impressive. And that, I think, was the problem. It was impressive in the 'listen to me' kind of way. It sort of 'told you' it was impressive. From the marble plinth of the valve-based amp to the way it presented the incredible detail it was able to resolve, it all just seemed a bit... well, 'showy'.

Somehow, the performance you were listening to never seemed to overshadow the unit itself. And that's the wrong way round - especially when the price tag is over £35,000. 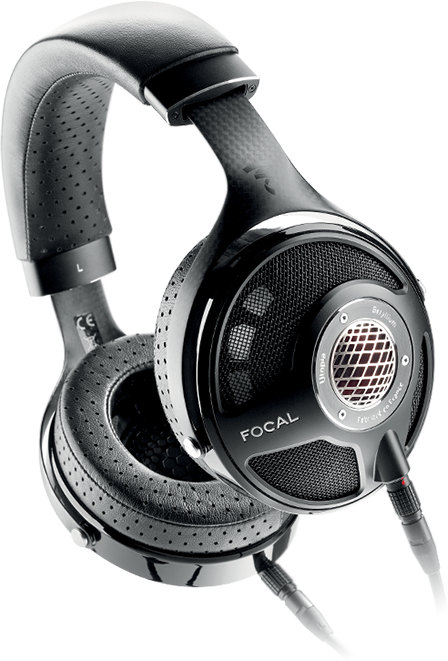 In the context of the HE-1, the new Focal Utopia is a bargain at 'only' £3250 a pair. Sadly, my listening session here was only short, so I can only give my initial observations; but boy they sounded good. The first thing I noticed was the huge sense of spaciousness they were able to convey. This came across in a highly natural manner rather than as a neat electronic trick and gave a real sense of air and space to the recording.

And then there's the way they are able to resolve such crispness and clarity without being over 'shiny' and soulless. That's no mean feat; so often, especially with digital and 'Hi-Res' sources, details can be so polished that they gain an edge and stridency which is just too much and leads to a fatiguing and over analytical experience. That's certainly not the case here. With the Utopia, that level of detail still manages to hold on to an analogue-type smoothness whilst giving a deep insight into the recording.

Ultimately, impressive though the Utopias were, I suspect that they were held back by the amp and dac they were being teamed with -  I so wish I had had chance to try these with the Cavalli Audio Liquid Tungsten amp...

Like the Rupert Neve headphone amp, the SPL range hails from the world of pro audio. On show was their range of headphone amps, DACs and power amps. Of particular interest was their Phonitor2 headphone amp and preamp which retails for around £1200.

The first thing to note is that it looks gorgeous. Its striking finish and duo of VU meters had me weak at the knees. OK, I know this has no bearing on the matter because good looks do not equal a good sound. But if it sounds good as well...

It's an interesting one this, because the pro-audio background has a real effect on the sound you hear (which is rather nice, by the way!). The SPL Phonitor 2 uses some very clever digital signal processing to replicate the use of monitor speakers in the studio - hence the name Phonitor, the 'headphone monitoring amp'. What it does in replicate the experience of listening to loudspeakers so that any producer monitoring via headphones can create a more consistent mix. This needs a bit of explanation...

When you are listening to a piece of music via loudspeakers you are always hearing with both ears. So, even if the signal is only coming out of the left channel, you still hear it in a kind of stereo because your right ear will also be listening. When it comes to monitoring with headphones though, this is not the case. You can see, then, how this can be a problem in the studio because there is a discrepancy between loudspeakers and headphones. That's what the Phonitor fixes. There are a number of adjustments you can use to recreate that sense of the sound emanating from one channel without the binary nature of a headphone forcing all the sound into one ear.

It sounds like it could be one of those clever effects that actually is just a bit of a gimmick and doesn't sound at all natural. Except that it does (sound natural, that is). I wasn't quite sure what to make of this. In real terms, there are headphone amps out there that ultimately sound better, more musical. The Phonitor still sounded very good though, and there's no doubting that this trick is highly effective.

When listening through this amp, I have to admit that as an experience it is more 'speaker-like' and moving onto a standard headphone amp afterwards does sound rather false in this respect. Given that it is also a preamp, I'd say it's pretty good value too, although do be aware that the inputs are rather skewed towards the pro market and are therefore limited to one pair of RCA phonos and two sets of XLR inputs with another set of XLR outputs for a power amp. If you're happy with that, I'd say it's definitely worth an audition.

reviewed by Sanaz Saeidabadi03 Jan 2022
"Saeidabadi"
Have you got Fiio X7 genuine battery?
Customer Service Reply No, that is not something we stock. Mr Google will be your friend on this one.
reviewed by Kevin Jewula13 Oct 2016
"Echobox Explorer Price Error Here"
Just for information: since Canjam, Echobox has unfortunately felt it necessary to increase the price by $100 to $599 which will mean an equivalent £ match, sadly making it a tad overly expensive for the UK market. It's still only available on pre-order. I also feel that the US-centric Tidal subscription is too much to bear too. Perhaps the Amazon.com streaming service can be loaded once established, as it's a lot more competitivly priced. Oh, by the way, the Explorer has a matching wooden dock, and in the black ebony finish it looks particularly glorious.
Customer Service Reply That's a shame about the price hike - quite a jump. Tidal is a tricky one isn't it? There's no doubt that the replay quality is a few notches higher than many, but at double the cost of, say, Spotify Premium with - what seems to me at least - far less breadth of content, it's difficult to see how it can be justified.