Home > News > CUSTOMER COMMENT: HOW LISTENING TO MUSIC AFFECTS ME

We ran a competition in the spring of 2012 asking customers to tell us how listening to music affected them. Here's the winning entry followed by some close runners up: 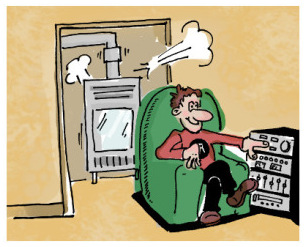 "You want to know how listening to music affects me?"
It stops jobs and tasks getting done, and gets me into trouble, that's what it does.  For example, the boiler has stopped functioning.  It's cold, the rain is bucketing down.  I've got the instruction handbook at hand, but have made the error of putting on a CD before sitting down to read the manual.  Result? Eleven tracks of EST later the booklet remains unopened.  The first hearing of this album since my last bit of fiddling with the system, and I'm seduced by the music, sounding even better than before, and little details impinging which I hadn't previously noticed.
Mr Andrews, this has got to stop.  It's always the same -  cables, cones, platforms, treatments, enhancements, tips - and every time I end up spending hours indulgently playing through CDs and vinyl instead of getting on with other pressing matters.  Please, stop issuing new products and upgrades.  I'm so behind with so many tasks, so much still remains outstanding.
Mr Hryniewicz of Middlesex
"Memories - Happy and sad - a song can reduce me to tears because it reminds me of my Dad who has recently died,and I remember how much I miss him and wish he was still here; or bring me a smile because I remember happy times with him and am so thankful he was my Dad and made my childhood so magical."
J Moffatt, by email
"I recently listened to music in hospital during childbirth. My partner was chatting to the midwife and she said it's increasingly used to reduce the need for medication and to decrease pain. There are several theories about how music positively affects pain but personally I can say it served as a distractor and gave me a sense of control - I used music we had heard while on holiday in Bali and it transported me there! The midwife was saying that music causes the body to release endorphins to counteract pain and slow music (which I had) relaxes the person by slowing their breathing and heartbeat. I can certainly vouch for this."
B Scott, by email
"Listening to music at home on my system is something I wait all day for. After coming home from work I carry out my husband and father duties, and once everyone has gone to bed comes my time.
That is the time that I can slip on a pair of headphones, put my feet up and slide into another world. The music creates the world and then my mind rests. I escape the world that my day was spent in and come alive in another dimension. With classical my mind follows all the layers and instruments trying to unravel all the notes and folds created by the composer. With Dance music my mind goes back to the feelings I had on the dance floor, hands thumping the air in celebration of the swirls of passion as the music rises to a crescendo and then the anticipation of the drop that lifts you back into a frenzy.
With Rock I get lost on the stage where i can play guitar like Hendrix and drums like Bonham. I can sing too like Freddie Mercury or Robert Plant (as long as no one can see me). Song after song my mind obliges to the world the song creates.
And then the little clock in the corner of my screen shouts out "Hey it's late" and the real world starts to pack up the gear and vacate the stage. Elvis has left the building. Until tomorrow."
S Savva, by email
"I would be about 25 and had just taken delivery of basic Arcam CD player that I was replacing the entry level Phillips model that I had purchased back in around 1990. I connected the CD to my NAD amplifier and Tannoy speakers.
I had a friend with me who was used to the carry around CD/Radios most young people have in their bedroom. He had a copy of Mike Oldfields Tubular Bells which I was not familiar so we decided to use this to test the new setup. Having plugged everything in we sat back, selected a reasonable volume and pressed play.
Neither of us said a word for the next 17 minutes as the dynamics and details of this setup filled the room and our minds. Neither of us had heard anything like it before and rather than 'Listening to a CD' this was more like a journey through the music and at the end of the track my friend turned to me and just said "Wow, what just happened"
This was the first time either of us had heard propper HiFi sound even though by todays standards it was a basic system."
D Rigg, by email