Home > News > LISTENING TO THE PERFORMANCE

LISTENING TO THE PERFORMANCE

2014's National Audio Show (September 2014 at Whittlebury Hall) proved to be a turning point in my long journey explaining what quality I am looking for in a Hi-Fi system or any part of it. My talk of 'musicality' and 'rhythm and timing' has been heard and understood by many but also remained a mystery to many. 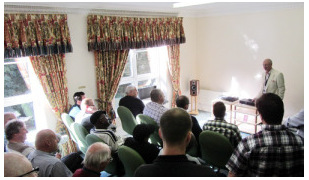 It finally came to me that what I was listening for in any system, cable or component comparison was an improvement in the musicians' performance. The change I am talking about is the one you hear at a live concert. The change that comes about as the musician(s) relax and start to deliver real feeling in the music they are playing, to communicate their love of the music they are playing to the audience, and their response to the audience reaction.
This kind of change has happened to some extent in most of the concerts I have been to. In many it happens in a thrilling and memorable way. We have all experienced it and we don't have to listen in a special way or even concentrate hard. It just happens and we feel it without having to think about it. That is how I listen to a Hi-Fi system as well.
When I explained this to any of my audiences at the Hi-Fi show and then did a quick system A-B, the reaction was amazing. They got it, they heard it, and they reacted to it. I have never heard so many in an audience react so strongly and positively to my demonstration. I was thrilled by their reaction because, like the musician at a concert, I was communicating my feelings directly to them - they got it!
The demo itself was very simple, using the same set-up we have used before: an Arcam CD player and integrated amp with a pair of Focal 706 speakers. I first played it using the free cables that the manufacturers provided - mains, interconnect and speaker cables plus a cheap white four-way mains extension. I then re-wired it with a set of our entry-level cables and block (PowerKord-100s plugged into our PowerBar mains extension, Timbre interconnects and 4PR speaker cable). If you just listen for a change in the musicians' performance, the difference is blindingly obvious in comparison with concentrating on trying to hear a change in the system's sound.
I suppose it is the difference between hearing and listening.
You can do this easily for yourself when comparing any change in your system: listening to a new piece of hardware, a cable, a support, cone or treatment. It is so easy it might make you laugh in surprise. When you think about it, listening to the musicians' performance is what it's all about. It's what your system is there for. It's the thrill that makes all the time, trouble and effort worthwhile.
First published in Connected magazine, issue 29, Winter 2014/15