They say that a week is a long time in politics, but what does 14 years in Hi-Fi look like? Back in 2006 when we first published issue 1 of Connected magazine, we kicked off our Customer System series with a focus on Russ’s own Hi-Fi. Fast forward to 2020 and our 50th issue, and we thought it was high time for an update. John Armer revisits and finds out what’s changed. Pictures: Peter Bevir. 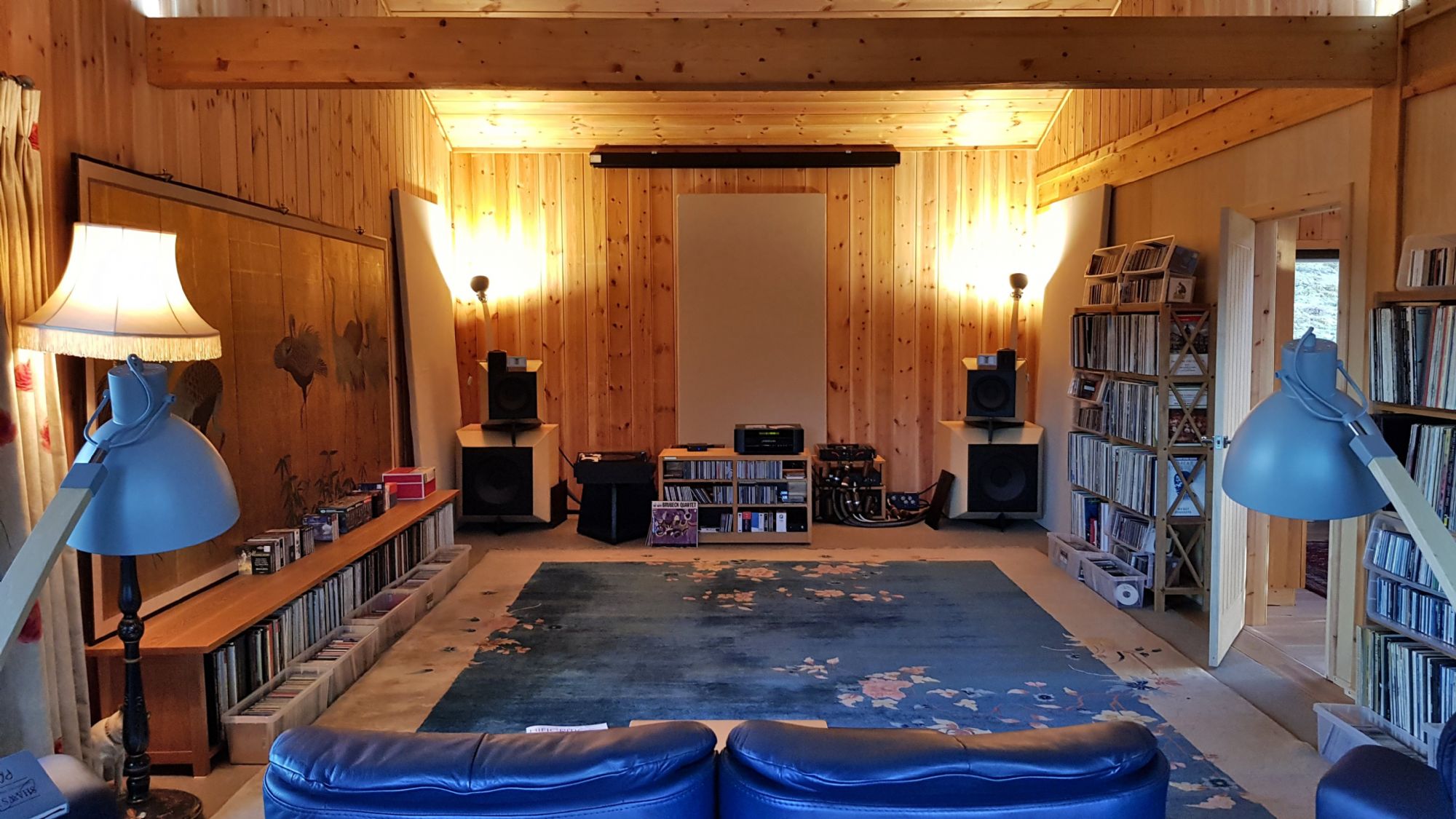 2006. CD was still king. Vinyl was the preserve of we enthusiasts – yet to be subject to a revival which brought it back into the high street shops (!) and supermarkets - and Blu-ray was just about to be launched and eventually win the format war against HD-DVD. MP3 was just getting a foothold and had yet to transform the listening landscape, and music and movie streaming was some way into the future.

2006 was also the year we first introduced the world to Russ’s own Hi-Fi system in the first issue of Connected; the system he’d built in the early 1990s and has continued to improve and augment since it was first created. Like the way we consume music, that system has changed since we first featured it… or has it? We needed to find out so Pete and I headed north to have a look and a listen.

Russ’s Hi-Fi system is largely self-designed and built; it started off as a challenge from his friend Chris who in the late 1980s commissioned Russ to build ‘the best Hi-Fi system in the world, cost no object’ (we featured it back in Connected 36). Once Chris’s was completed, Russ built a second system for himself and it’s that one that continues to be used to this day. It’s the system that Russ listens to music on, but it also an R&D tool – every new product we receive is tested on it first. If it passes the ‘Russ Test’, it’s included in the range. 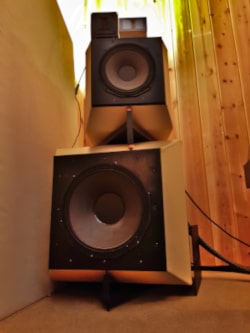 The most striking feature of the system are the cream leather-clad speakers. These, the Russ Andrews Olson II loudspeakers (right), are Russ’s own design, inspired by Harry Olson, whose concept was to have one driver behind another in the cabinet – a principle also adopted by Linn in their Isobarik loudspeakers.

The drive units themselves are to Russ’s specifications (15” bass drivers and 10”midrange) with ribbon tweeters made by Visaton (two per speaker) used for the high frequencies. Pioneer supertweeters are used to good effect too. The speakers are very sensitive (99db (1w/1m)) and their design ensures that they are clean, fast and dynamic. 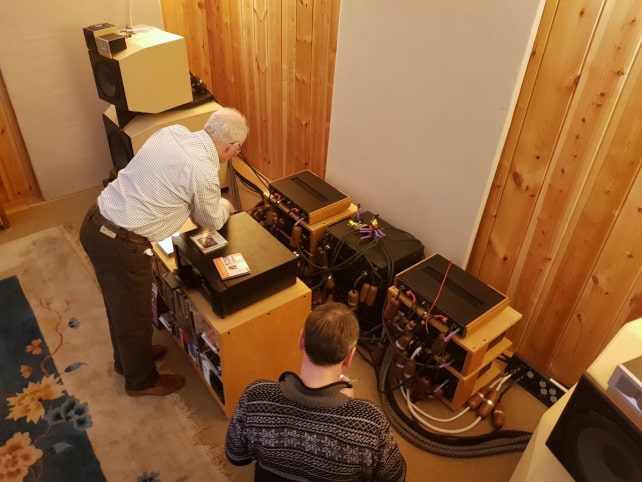 I asked Russ how he’d describe the amplification and speakers. “There are no crossovers on the input of the loudspeakers” he told me; “the crossover is done between the preamp and the power amps. The bass drivers run full range; the midrange amps are high pass filters: you’d call it ‘semi-active’”.

The amps and loudspeakers are largely the same as they were when we featured the system in 2006… it’s the front end that has seen the most changes since then.

Back in 2006, Russ’s main digital source was his heavily modified LaserDisc player used to play CDs; this has since given way to one of Meridian’s CD players, albeit heavily modified. It was testament to the performance of the LaserDisc player that it remained in the system for so long, but with good reason – I heard more than one CD player tested in the system that simply couldn’t hold a candle to the much older, but far more musical, disc spinner.

Meridian’s 808.2i CD player/ preamp was, however, another matter entirely, delivering even more of the rhythm and timing – that sense of the performance – recorded onto the discs. 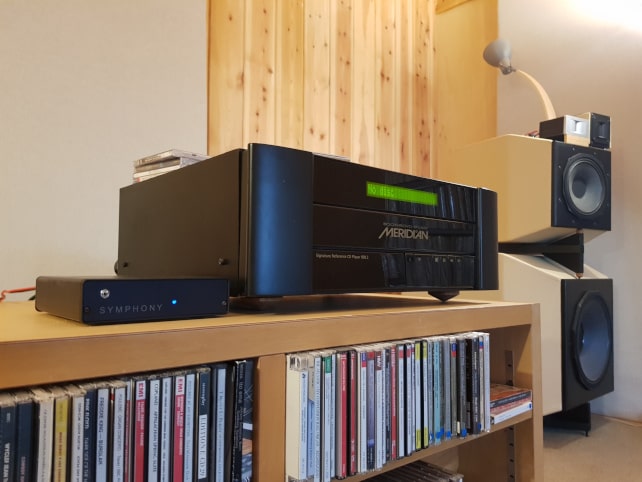 The Meridian 808.2i CD player/preamp and Symphony Pro resting on a Torlyte A/V Rack

The CD player isn’t standard, of course, with extensive modifications carried out to the power supply and signal boards, and even the top and sides of the player are made from Torlyte. A specially-adapted version of our Supplier DC power supply is used internally, with Kimber Kap capacitors and silver wire used extensively.

Russ’s grounding concept is taken to its ultimate expression here, with each part of the CD player separately grounded – the transport, power supply, signal circuit board and chassis. Each of these are wired to a single grounding point on the CD player which then connects via an RF Router to ground. 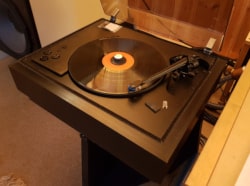 Back in 2006, the sources connected to one of Russ’s Silver Reference preamps; today the Meridian CD player (which is actually a combined disc spinner and preamp) handles the control duties, connecting the SOTA Star Sapphire turntable (right) via one of his Silver Reference Disc stages. The original preamp is still in use, however, and sits between the Meridian CD/preamp and the power amps; it serves as a buffer and to match impedances.“The system sounds much better with it in circuit than without”, explained Russ.

Connecting it all together

So that’s a run-down of the hardware; how about the infrastructure? The biggest, most visible change to the cabling since 2006 has been to fit SuperKords to all components. SuperKord-500s have been employed extensively throughout - including the linking cables between the power supplies and the components, which is why there are so many of them; some of the key ones use Kimber’s silver cable too. 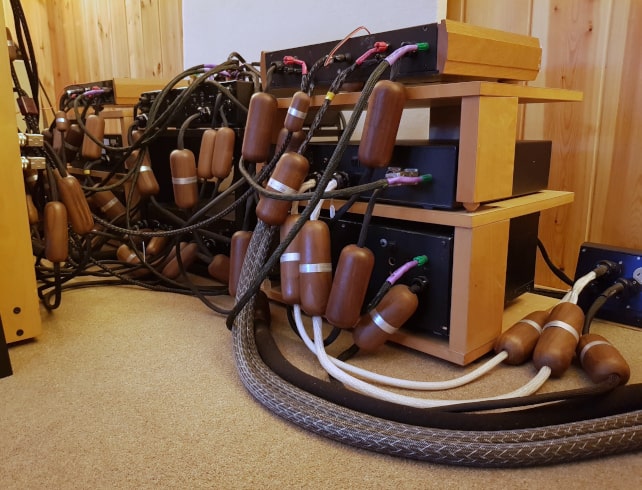 Four Russ Andrews PowerBlocks are used to connect to the mains. All Kimber Select interconnects and speaker cables have the Sawyers Discs fitted and, as to be expected, all components are grounded and connected via the RF Router MK2 to an external earth rod. One of the Coherence Systems Symphony units sits next to the CD player. A Balanced Mains Unit supplies the Hi-Fi mains circuit, which Russ has ingeniously fitted in a channel which runs around the edge of the room. Having it in a channel like this means that it’s accessible if needs be, and allows for future expansion.

Russ and his wife Sue have moved from the converted stone barn they lived in when we last featured the system to a house of all-timber construction, in the Passivhaus style; the change of construction brought with it its own challenges in ensuring the system delivered good sound. 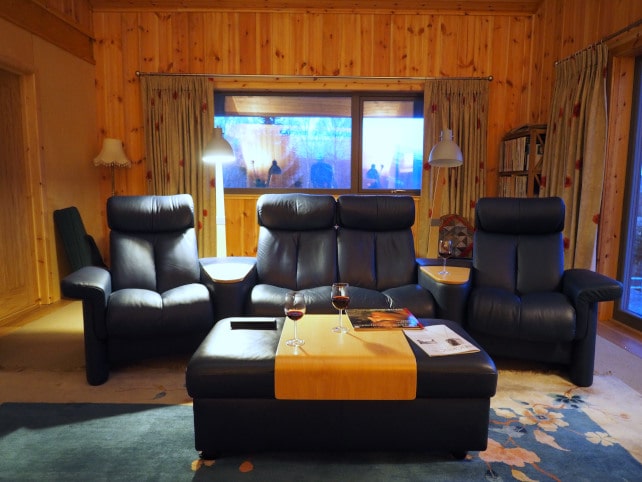 The system is now in a large room with timber walls, floor and ceiling which is open to the roof, and Russ explained that the timber construction was a concern before he installed the system. “My biggest concern was the comparatively low mass of the timber walls, compared to traditional masonry walls” Russ told me. “Speakers acoustically ‘see’ walls – and in a timber frame, anything below 80Hz or so would disappear, meaning that the reproduced sound would have disproportionately quiet deep bass. I was very keen to increase the mass of the walls so this wouldn’t happen”.

So how was this achieved? Quite simply by overspeccing the timber construction. Russ’s listening room is at the end of the house and has three external walls, and Russ used multiple layers of Oriented Strand Board (OSB – a type of engineered board a little like plywood, but stronger and more durable) to build up the external walls, creating a far higher mass wall that was very rigid and strong. 22mm tongue & groove finishes the walls on the inside. 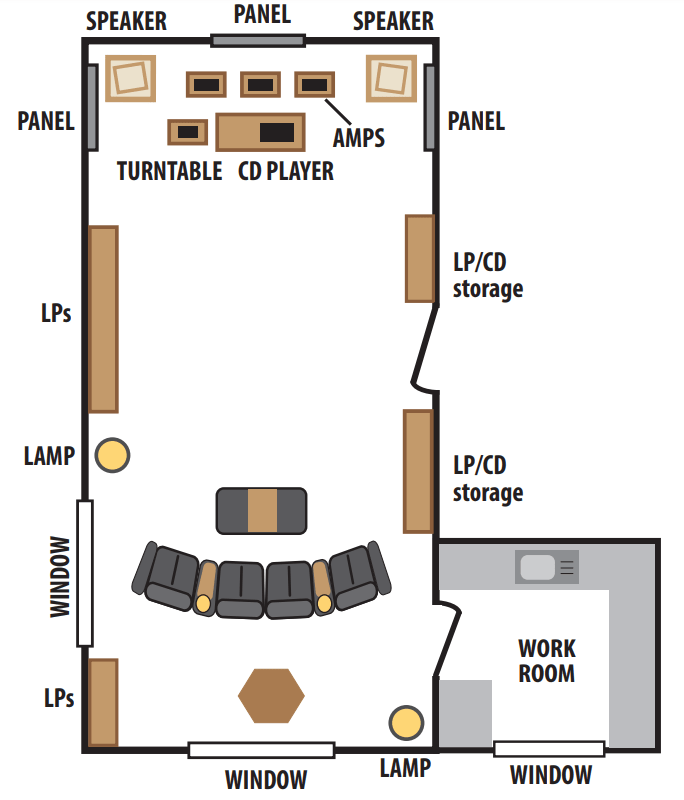 The internal wall that separates the listening room from the rest of the house was of lighter construction, so Russ packed the framework with timber, to create a very solid, heavier wall to match the others. To add mass to the suspended wood floor, Russ used kiln-dried fine sand spread in the space under the floor.

The result of all this work was to create a stiff‘box’, with higher mass than it would ordinarily have been. “The speakers have lots of deep, low bass”Russ explained,“and the room has to be of sufficient size so that you can hear the bass, mid and treble at realistic levels.”

Settling down to listen

I was keen to hear the system in its new home having had plenty of opportunities to hear it previously. Physically, this is a big system, but on listening it always had the uncanny knack of being able to disappear, leaving just the music – the performance – in front of you. And so it was when we sat down to listen. Russ treated us to a wide range of music on both LP and CD – from the Dave Brubeck Quartet via Rage Against the Machine to the Widor Mass recorded at St Sulpice in Paris. The system got to the heart of everything; it was delicate and soft when needed and it could play as loud as you wanted without ever being harsh.

The system has evolved and matured since we featured it back in 2006 and that sense of naturalness and realism was even more evident. We listened to a fairly lengthy passage from Tosca on LP (conducted by Colin Davis on the Philips label), and the system perfectly reproduced the performance; you could sense the action unfolding, with the performers moving in a real space just in front of you.

It’s not too long since Russ set the system up in the new room and I sensed that the coming months would see him fine tuning the sound to get the best performance in the new space: the experimental sound control panels behind and to the side of the system may be moved, for example.

I asked Russ if he had any bigger plans for the future. “I’d like to go fully active, like my friend Chris’s system. That system uses more amplifiers per speaker than mine and it has more dynamic range and better control. I’m also planning to integrate my Home Cinema – the screen is already fixed in place”.

Russ and Sue with the system

A system like this is continually evolving and I asked Russ if he thought he would ever complete it. “I hope not!” he joked… “I’m always striving to find ways of improving it and making it better. I’m delighted that the recent developments – SuperKords and Super Burn-In, and most recently the work on grounding – have brought such significant improvements in musicality. I didn’t think that there would be so much more to get out of the system.”

I suspect there will be plenty more to come in the coming months and years, which will result in more ways for us all to improve our systems too. As they say… watch this space.