This year Kimber Kable will be 40 years old. To mark the occasion we are introducing a one-off limited edition version of their famous PBJ analogue interconnect. Simon Dalton takes a deeper look.
N.B. This article relates to special edition version of PBJ which was available until 30th April 2019.

PBJ was the first interconnect that Kimber introduced: an all-copper design that was the first in the range and exhibiting the famous braided design. But why is it called PBJ?

Let me take you back to the 1940s. During the war in Europe, American soldiers needed a simple way to get a good supply of protein in their diet. Peanut butter sandwiches were added to their rations as an effective solution but GIs also added jelly (jam to you and me) to add some extra sweetness. 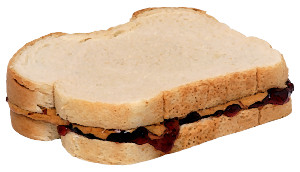 Thus PB&J, or PBJ, was born. Following the end of the war, ex-serviceman wanted to seek out some of the foods they enjoyed overseas and demand for Peanut Butter and Jelly sandwiches grew to a point where it fast became a staple of American cuisine.

The term 'PBJ' became ubiquitous with the idea of anything that was a staple and seemed the perfect name to mark Kimber's first analogue interconnect - a cable that has itself become a legendary staple amongst American audiophiles.

Like any good staple, PBJ has changed very little since its first introduction thirty-odd years ago. That's no bad thing; when you get something right first time, why fiddle? As Stephen Mejias suggests in his Stereophile review, "the fact that Kimber's tried-and-true PBJ... has stuck around this increasingly fickle world all this time is just one reason to take notice" He continues, "at a time when people seem more interested in what's new than what's needed, Ray Kimber remains dedicated to providing high-quality products that will last for years to come".

PBJ features a tri-braid construction utilising three hyper-pure copper, VariStrand Kimber Kable conductors, each individually insulated with an extruded fluorocarbon dielectric and braided together. That all sounds a little bit technical so let's unpack that last sentence in a little more detail. 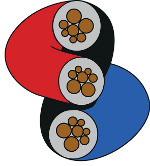 Simply put, the PBJ uses three conductors, braided together to form a 'single' cable. In the single-ended (phono) cable, the red wire is used for the signal, blue for ground and the black is used as a 'drain' wire, connected together with the blue wire at the signal 'input end' and cut short at the 'output end'. This configuration produces a sound which is more coherent, with a better, solid phase accuracy. As with all Kimber cables, the weave acts as a filter, reducing both airborne Radio Frequency Interference (RFI) and RFI which can be carried along the cable from one piece of equipment to the other.

'Hyper-pure' is Kimber's best copper conductor, ensuring a highly efficient signal transfer only surpassed by their pure silver conductors. 'VariStrand' is the name Kimber give to their unique multi-strand conductors. Each of the three conductors making up the cable is itself made up of seven individual strands of differing gauges. Each gauge 'favours' a different broad frequency allowing the cable to represent the overall frequency range of the music more accurately (see illustration above).

One of the main reasons fluorocarbon is used, apart from its highly effective insulation properties, is that it can be applied to the conductor at a lower temperature, and thereby minimises any heat damage to the copper.

PBJ is a cable that surprises with its ability to bring out the best in budget systems whilst not disgracing itself in the company of higher level kit. Tonally balanced with clear, articulate highs, accurate midrange, tight extended bass, and three dimensional soundstaging are common descriptions echoed by surprised reviewers and satisfied customers alike.

In his detailed review of the cable back in 2012, Stephen Mejias of Stereophile magazine notes that "The Kimber PBJ interconnects do an outstanding job of re-creating the performance space, setting well-defined musical images within a surprisingly wide, deep soundstage". That's not the kind of sophisticated improvements that you'd expect from a so-called 'entry-level" cable.

This level of performance is reiterated later on in the review when he observes that "everything I listened to benefited from greater clarity, detail, depth, and presence". Earlier in the text, Mejias had gone into some detail about the album Take Care by the Canadian rapper Drake. Part of the reason for this was because of the way that the PBJs worked so well with his voice, making "individual words and even individual syllables sound clearer and more precise".

Even more impressive, he goes on to argue, "was the fact that the Kimber cables did all this without sacrificing momentum and flow--the stuff that makes a recording sound like music. Even as the Kimbers forced me to analyze my music, they allowed me to form a deeper emotional connection to it. Though Drake's words were sharper and more tightly focused than I'd ever heard them, they also sounded more believably human."

Importantly, if rap isn't your thing, he noted that the results he found were consistent across all types of music he listened to. Akhito Obama, for example, is a Japanese musician who plays the shakuhachi - a type of wooden flute. On his piece Kumano Codex 4, the reviewer describes how "Obama just barely pulls the flute from his lips and reaches for a breath" and yet the "Kimbers infused that moment with the sort of life and magic that only the best hi-fi can conjure".

As I said; that's a very impressive assessment of a cable from the start of a range. 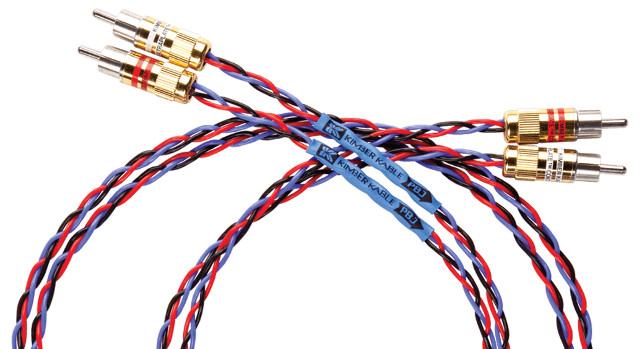 For a limited period: now with WBT 0114 RCA phono connectors

In their standard form, PBJ interconnects come fitted with Kimber's proprietary UltraPlate connectors and are available from us to special order. For a limited period however, we are now offering them from stock with WBT's superb 0114 RCA phono connectors - but only until 30th April 2019.

The WBT's clamping mechanism, which works in the same way as the chuck in a drill, firmly clamps the outer contact of the plug against the RCA socket on your component. The high clamping pressure not only guarantees a secure connection but also minimises resistance making for a clean and robust connection. In addition, the central pin is slotted to give a firm yet 'elastic' contact, ensuring a reliable electrical connection.

PLEASE NOTE: We can only supply Kimber Kable within the UK.